A downloadable game for Windows

When I was 10 years old I got a C64 and thought it could be programmed in natural language. I literally wrote something like:

"I want a game where I am a plumber who needs to avoid barrels which are launched by Kong by jumping them. I need to reach the top of the screen, etc..."

Unfortunately I only got a Syntax error in exchange of my passionate description of the game.

35 years later I found the will to try it again and this time things have gone a bit better.

With this project I am willing to replicate the behaviour of the original Donkey Kong by Nintendo.
I tried to simulate the game logic and timing spending multiple hours watching videos of the original game.

As a Nintendo's games lover I wanted to express my tribute to the Mario/Donkey Kong serie and to game designer Shigeru Miyamoto.

Game programming is now completed with four brand new levels added on the top of the 4 original ones.

Arcade Mode is meant to play the original 4 levels in the same order as in the Jap version of DK.  Name and Score are saved only if higher than 5th place.

Redux Mode features 4 new levels (5,6,7,8). Starting level can be selected from whichever one has already been played.   Name and Score are always saved.

Extract the zip file and run the DonkeyKongRedux_180 executable

Fantastic rendition of Donkey Kong! Thanks so much for making this! Would happily donate if there was an option to do so. Looking forward to seeing what you do with Phoenix and future projects (Popeye Arcade anyone...?).

thanks for the positive feedback, I really tried it to make as much as possible similar to the original one, I really spent hundreds of hours recording videos and studying where every pixel was and the timing for each event.

No worries for donations, I would appreciate if you can make a high-score in the top 50 instead.

Make sure to play the 4 extra levels I added to the game, I know they are difficult but DK itself was known to be a difficult game.

Regarding Phoenix I will soon, very soon, continue developing it, so expect an update within the next 2 months or so.

Not sure about a future project, I was thinking of Kung Fu Master or Double Dragon but I might also just try to create a brand new game, not soon anyway :-)

Great recreation of the arcade game! However, some sound effects seem like they're from the NES version. Please fix this.

Edit: I also could've sworn I could jump over those fireballs. And what does level 6 want from me? That purple koopa keeps dashing into me and I can't avoid it

level 6, make sure to beat 6 turtles and the purple one will not be a problem anymore ;-)

Thank you, I will do that! Please make this clearer to new players.

EDIT: Apparently, I can't do that! I just got a new computer, with a lot more horsepower than my previous one. The game runs at super-speed now, making anything requiring even a small amount of precision absolutely impossible. Sorry.

EDIT 2: Forgot to mention this in my first edit, but if I set "

AlternateSyncMethod" to 0 in the options.ini file, the sound effects play at a normal pace, but the graphics are nowhere to be found. Hope this helps!

I think the problem is due to the rendering method or Vsync. Can you please try a combination of "B" and "L" during the game? I mean, one of the 4 possibilities should work well based on what I think is causing the super speed at your side

Also, try with your graphic card settings by making sure Vsinc is set for this game

THANK YOU. Pressing "L" works for me!

Yes you  can jump over fireballs it's hard to do but works.

Some Dutch player just made over 100K points score, I myself didn't think this was possible!

Hey dude, please post something here, I really want to know more about your record  ;-)

What to tell about the 100k? finish tour levels quick and clean.

Every round the bonus gets higher. Finish 4 rounds and you wil reach 100k.

Greetz from the Netherlands

p,s  to the programmer of Redux.   a BIG compliment to your work: The best donkey rework i've ever seen. You missed 1 little thing: back in the 80's you could jump out of the screen in level 3. This cleared the level very fast.....

Hi Andreas, thanks for your comment, I really put a lot of hours into this project so it's great to receive good feedback ;)

Finishing the 4 rounds is already too difficult some some players, doing it more than one time in a raw is for pro players :-)

What about the level 3 bug, is there a video you can link so I can check how was that?

Last, did you try the 4 extra levels? For level 5 I mantained the same style but then I wanted to add some extravagance :)

It's obvious that you put in a lot of hours, as i said very good job you've done.

I prefer running with mario quiting the rounds as quick as possible.

The glitch in round 1 (ladders and barrels ) in level 3 was up on the first ladder. At the very very end, on a certain point mario turned the back at you, than you had to jump to the right en mario was gone and the level fnished. He didn't bounce back at the invisible wall. You had to be quick because of the approching barrals. I bet there are no video's of it. Back then we had no smartphones with camera, ( but we where happy hahaha )

Then there was another thing i now remember. We called it holding hands, on top of the ladder. In a certain position barrels did not come of the ladder and gave some relaxing time.

It's a long time ago, i was 11 when donkey came. In 1986 we almost went broke on this game hahaha

Thanks for the added info Andreas.
Coding the glitch would be quite easy to implement but I would still need to see it myself in order to take the correct timing (I count the frames and the pixels literally one by one). At the end I think very few players would know about it anyway :-)

So it seems that I am one year older than you, I also played DK in the arcades it was one of my favourites and it still is.

How did you end up here, are you also coming from the DK forum community?

Thanks mate, I am happy you liked it so much!

Thanks John, you must really try the new level which I am going to release as soon as I find the time to complete it.

Interesting, bombjack is a personal favorite in the arcades and still playing today. Keep on the retro max mash up each level will be a pleasure to play. Art by crvnjava69 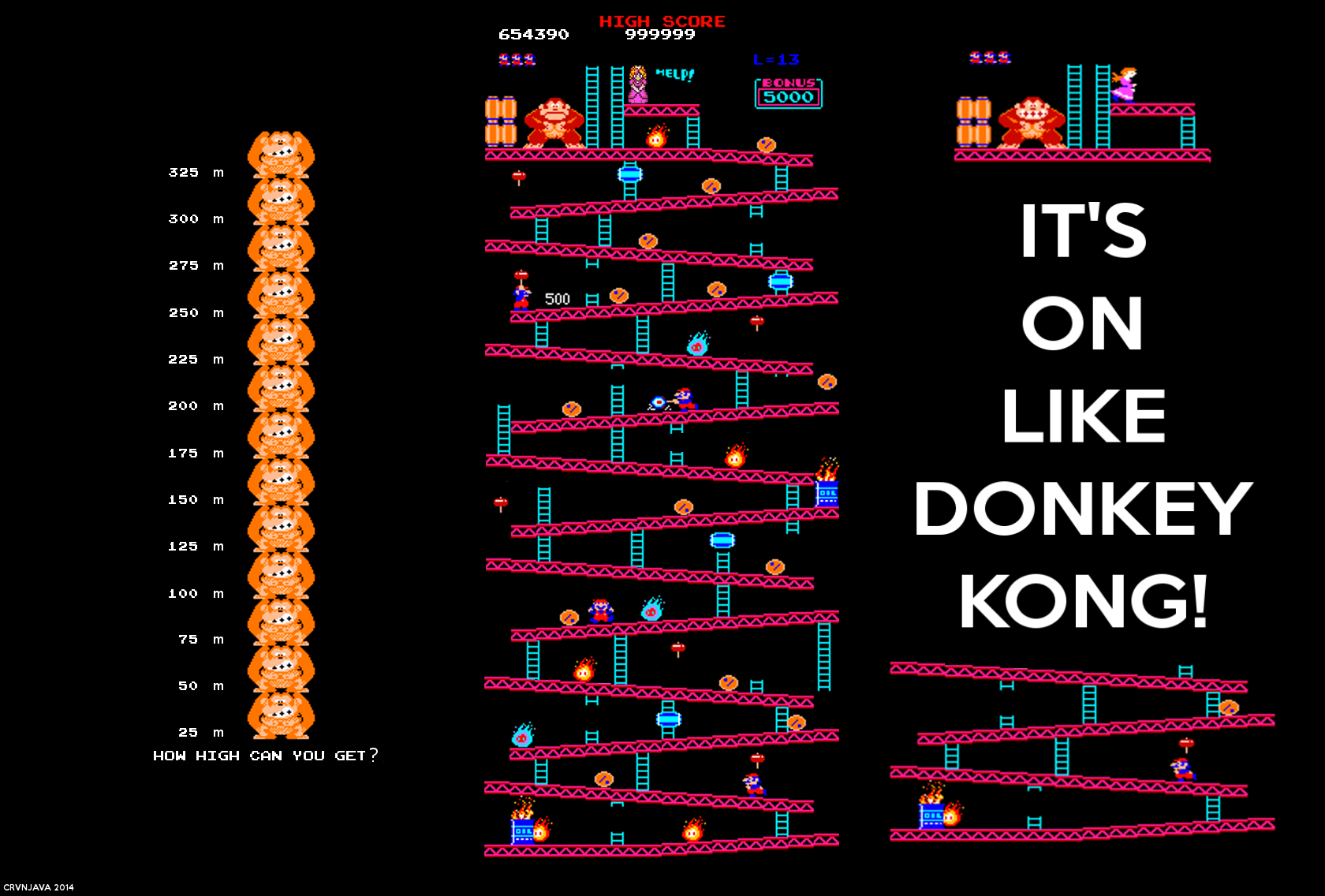 Has the new level been included in the v1.50 final version?

Yes, it's level 8, but u will need to 'unlock' each level from 1 to 5 to play it (after you complete a level it becomes unlocked, meaning you can chose to start from whichever u want each time you start a new game)

(Level 6 does not exists yet, level 7 is almost completedm the screenshot below is from the level editor 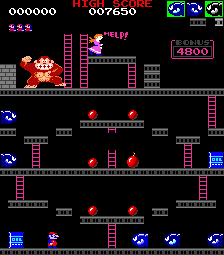 amazing classic game of an ape carrying endless amount of barrels to prevent the plumber to save the damsel in distress. hope you make some classic games more interesting. my favorite classic games are space invaders and galaga.

Hi there, once finished with this (very close at this point) I am thinking to create some brand new levels, but the idea is to keep the same style.  Talking about other classic games, many many years ago I also re-programmed  in full Phoenix, it can be found and played online.

Galaga is also a good candidate for the future. My idea is re-program 4-5 classic games and for each one add a new section with new levels and/or new game modes, work in progress  ;-)

Have a try at the latest build of Donkey Kong, I just added collision between hammer and barrels and a few sound effects 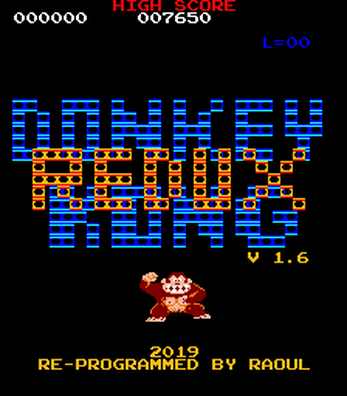 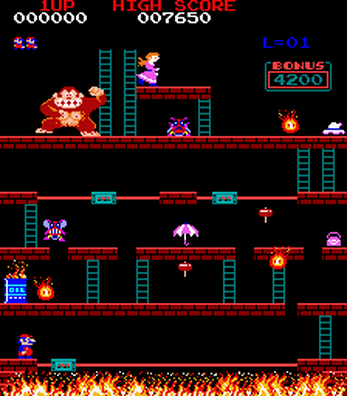 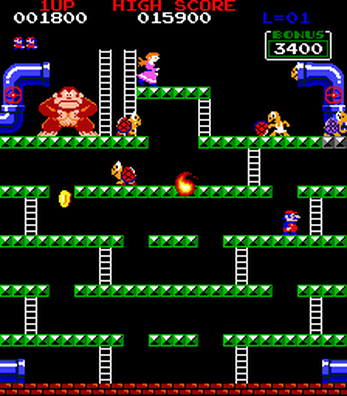 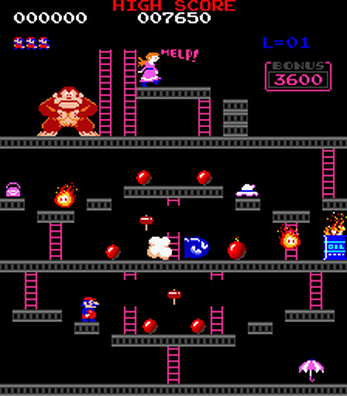 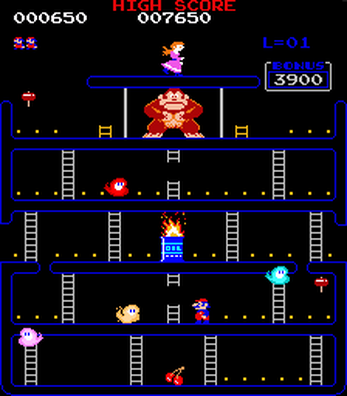 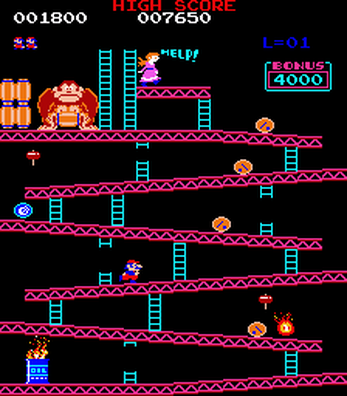 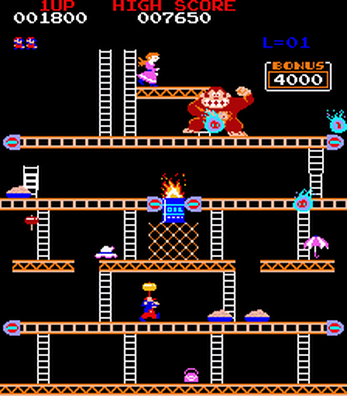 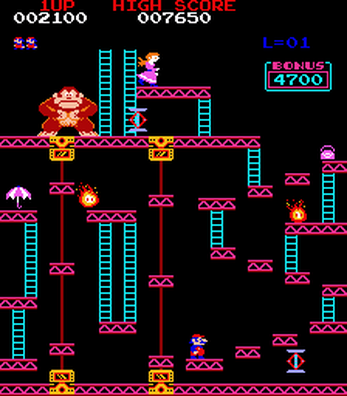 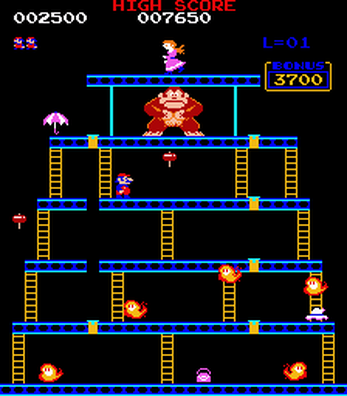 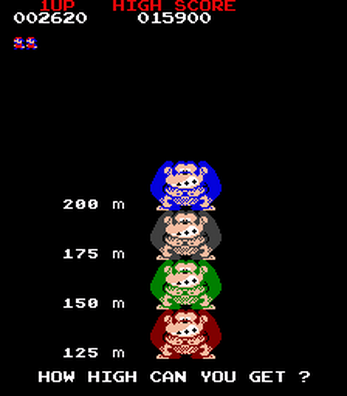 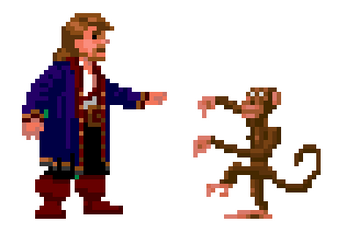